Health departments begin to crack down on CBD in food, drink

Health departments begin to crack down on CBD in food, drink

New York City health officials reportedly this week banned restaurants and bars from serving cannabidiol, or CBD, products in food or drink, throwing cold water on one of the industry’s hottest trends.

Similar crackdowns are being reported in Ohio, Maine and Georgia, where health officials are also working to stop restaurants and bars from incorporating CBD into dishes and drinks.

CBD products have taken off across the country in various forms, largely as a derivative of hemp, claiming to offer a calming effect without the high that comes from tetrahydrocannabinol, or THC, found in cannabis. Use of the non-intoxicating CBD supplement in restaurants and bars has grown across the country in recent months — particularly in beverages.

In the past, some argued that because the popular CBD supplements were made from hemp, they fell into a legal gray area, even though hemp is a product of the cannabis plant. The latest federal farm bill, approved by Congress in December, took hemp off the list of Schedule 1 narcotics, opening the door for broader — though still highly regulated — production and sale of hemp products, so long as THC levels remained below legal limits. 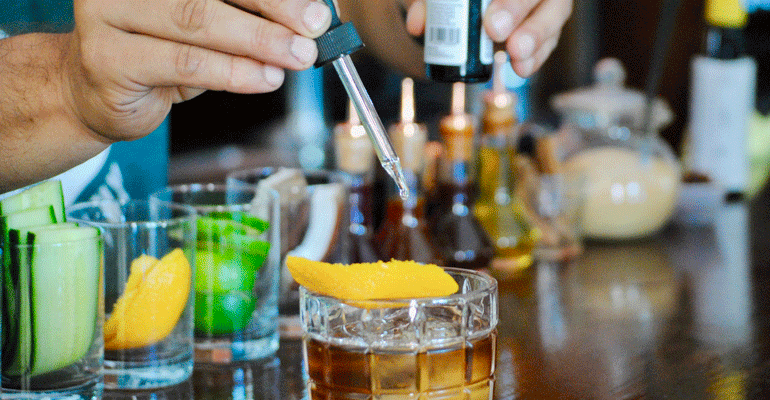 Still, the U.S. Food and Drug Administration continues to consider CBD or THC in food or drink used in interstate commerce illegal, regardless of whether it is hemp or cannabis derived. Companies are also prohibited from making health claims about CBD without FDA approval.

In late December, FDA commissioner Scott Gottlieb appeared to open a door for CBD use in restaurants and bars, saying in a statement that there may be paths available for the agency to consider whether certain cannabis-derived compounds might be permitted in food or as a dietary supplement.

“Although such products are generally prohibited to be introduced in interstate commerce, the FDA has authority to issue a regulation allowing the use of a pharmaceutical ingredient in a food or dietary supplement. We are taking new steps to evaluate whether we should pursue such a process,” he said, pledging to hold public hearings “in the near future.”

Meanwhile, in New York, health officials in January began “embargoing” CBD products in restaurants, asking operators not to use the products — but not confiscating or asking for the CBD products to be destroyed. Eight restaurants have reportedly been ordered to stop using CBD in New York.

Fat Cat Kitchen in Manhattan, for example, posted on Instagram and Facebook that its popular CBD products were embargoed, showing a photo of items tagged in a plastic ziplock bag. “Are they going to do this to every business selling CBD edibles?” the post asked.

Meanwhile, in states like California, where recreational cannabis is legal, the use of CBD in food and drink has become increasingly common, despite state regulations that prohibit the addition of CBD products in food or drink.

“Until the FDA rules that industrial hemp-derived CBD oil and CBD products can be used as a food or California makes a determination that they are safe to use for human and animal consumption, CBD products are not an approved food, food ingredient, food additive or dietary supplement,” California health officials said in a statement posted last year.

Enforcement, however, has been left to local health departments, leaving CBD-infused food and drink relatively easy to find.

The Los Angeles-based coffeehouse chain Alfred, for example, allows guests to add CBD derived from hemp to any drink for an additional $4. Alfred includes seven coffeeshops and two tea rooms in Los Angeles as well as three other locations in Texas and Japan.

Jordan Hardin, Alfred’s food and beverage director, said customer response to the CBD-spiked coffees has been strong and the presence of CBD on menus has become “really normal” at many Los Angeles restaurants.

But Bauman found a work-around.

Local health officials made it clear the coffee bar couldn’t add CBD to food or drink, but the regulation does not prohibit guests from adding it themselves.

Now La Marque offers an in-house CBD bar where guests can choose from several hemp-derived tinctures for $5. The guest can then add a dose to their beverage or avocado toast, salad or wrap, as they like. 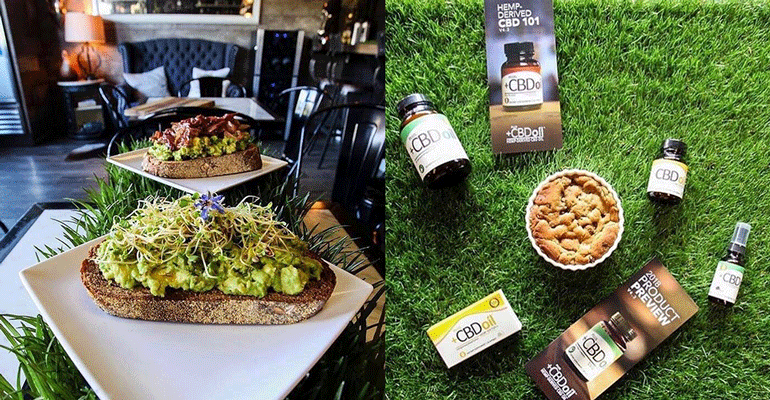 La Marque began the offering in October, and Bauman said it sold about $500 in CBD tinctures alone in November. Now he is developing a CBD bar strategy to sell to other restaurants.

Elsewhere, the line between the worlds of cannabis and food continues to blur.

In Colorado, another state that allows the sale of cannabis for recreational purposes, CBD has been embraced by concepts like the two-unit Habit Carbon, a café and bar with an adjoining Doughnut Dispensary, where guests can enjoy CBD in their cold brew or kombucha. CBD isn’t in doughnuts as of yet, but guests can inject a shot of whiskey into the sugary treats.

CBD’s popularity in Colorado has led some operators to see a growth opportunity.

Last month, Denver-based Illegal Burger announced a partnership with a Dallas holding company to launch a food truck in Colorado that plans to sell foods that contain hemp products.

The AmeriCanna Café food trucks will serve as a pilot to test a brick-and-mortar concept. In addition, the five-unit Illegal Burger also plans to add to its menu CBD-infused add-on ingredients, such as in seasonings or a truffle aïoli.