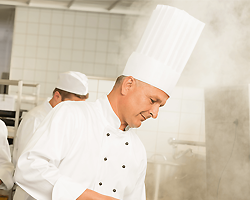 The stature of any Chef can be quickly recognized as they stride through a busy kitchen. The height and sharp whiteness of the Chef Hat denotes prestige and experience in the culinary world. Crisp white cloth hats, also known as toques blanches, became a part of the traditional ‘Chef uniform’ in the French kitchens of the 1800’s.

The differing heights of various Chef Hats indicated the stature of the various kitchen staff members. The highest hat was worn by the head Chef and therefore they could instantly be identified amidst the other personnel. As the Chef Hat was integrated into kitchens all over the world, numerous other traditions emerged. One such tradition suggested that the number of pleats in the Chef Hat indicated how many different ways that particular Chef could prepare an egg – some could boast 100!

To combat the rising cost of linen and laundry, modern Chef Hats are now offered in disposable paper options. They still possess the grand history and tradition with their appearance all the while providing a cost saving to your operation. Handgards has a complete offering of Chef Hats available in two different versions – traditional wide pleats and an economical fluted pleat option. Both versions come in three convenient sizes, 7, 9 and 10 inches in height, which will give your restaurant the freedom to categorize the back of the house staff from head Chef to line cooks.